The end of the year is fast approaching (less than three weeks now separate us from the New Year), and the market’s rollercoaster ride does not appear to be letting up any time soon. With that in mind, there are several items we want to address.

Last week the S&P 500 declined almost 4%, entering negative territory for the 10th time this year. That statistic does not tell the whole story, however, as only a handful of S&P constituents are printing gains year-to-date. The oft-quoted FANG stocks (Facebook, Amazon, Netflix, Google) have kept the index afloat while most energy and utility companies are down between 10% and 30%+. Raymond James Chief Investment Strategist Jeff Saut opined last Wednesday, “this week marks the peak in tax loss selling that typically sets the stage for a rally the final two weeks of December,” and goes on to identify the mid-part of the month as the beginning of the so-called Santa Claus Rally. Forget my two front teeth – all I want for Christmas is a strong bounce in the market.

This Tuesday, the Federal Reserve Board will yet again meet for two days to deliberate the fate of interest rates. According to the Wall Street Journal, “about 97% of business and academic economists surveyed…predicted Fed officials will raise the benchmark federal-funds rate Wednesday.” Indeed, we too believe the Fed will act, but we expect the increase to be very small (0.25%), and it will likely be several months into 2016 before we see a subsequent hike. While this is a long-term positive signal that the US economy is improving, we expect the market’s initial reaction to be poor. We see this as the primary reason for the current volatility, and it appears that the market’s near-term future rests on whether this first rate increase is a solitary event or a hawkish change in the Fed’s stance on rates.  Raymond James Market Strategist Andrew Adams put it best: “Events like these strengthen my belief that you really need to be either very short-term or very long-term in this type of market environment, which means most of our FAs and clients should still be thinking long-term and putting a reaction to this announcement in the context of the long-term trend.” This may certainly be the main entrée on investors’ plates at this point, but several additional appetizers are of equal importance. 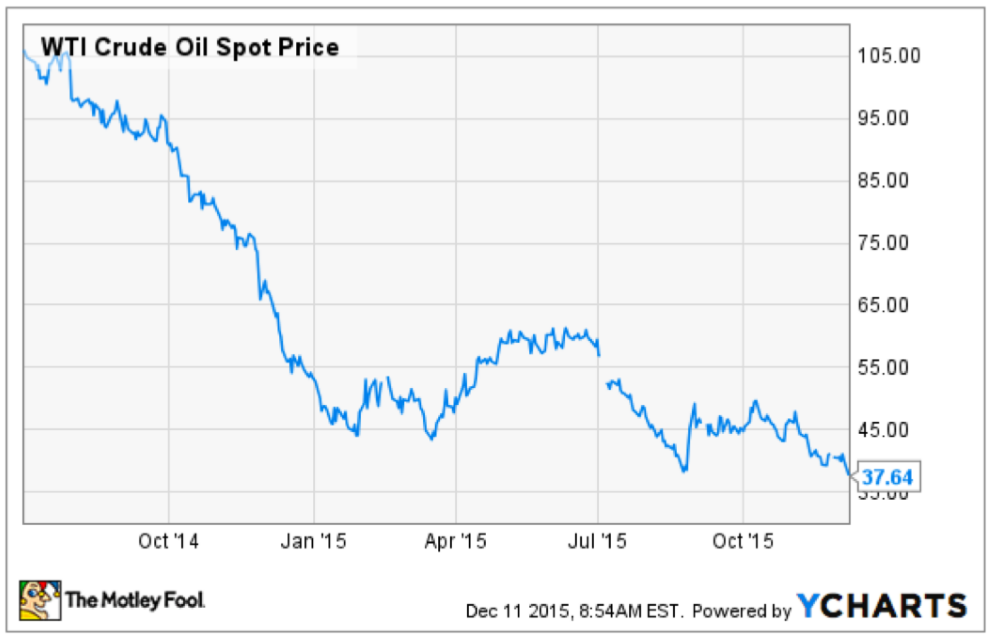 MLPs, or Master-Limited-Partnerships, have been popular vehicles for income-seeking investors due to their high dividends and unique tax structure. Crude oil prices have almost halved in 2015, and we do not see a catalyst to drive oil higher in the near-term (see chart on previous page). Compounding oil’s weakness, investors have taken this opportunity to either 1) exit the MLP sector completely, or 2) tax-loss harvest their MLP positions, both of which have driven share prices lower.

The US dollar has been on a tear this year thanks to improving economic data and speculation about a rate increase. The USD index is up over 20% year to date, but recent trading and currency speculation has pulled the dollar down and hurt our currency-hedged positions. We believe the Federal Reserve’s announcement this week will encourage yield-seeking foreign investors to shift another massive wave of money out of Europe into US Treasuries, pushing the dollar even higher. 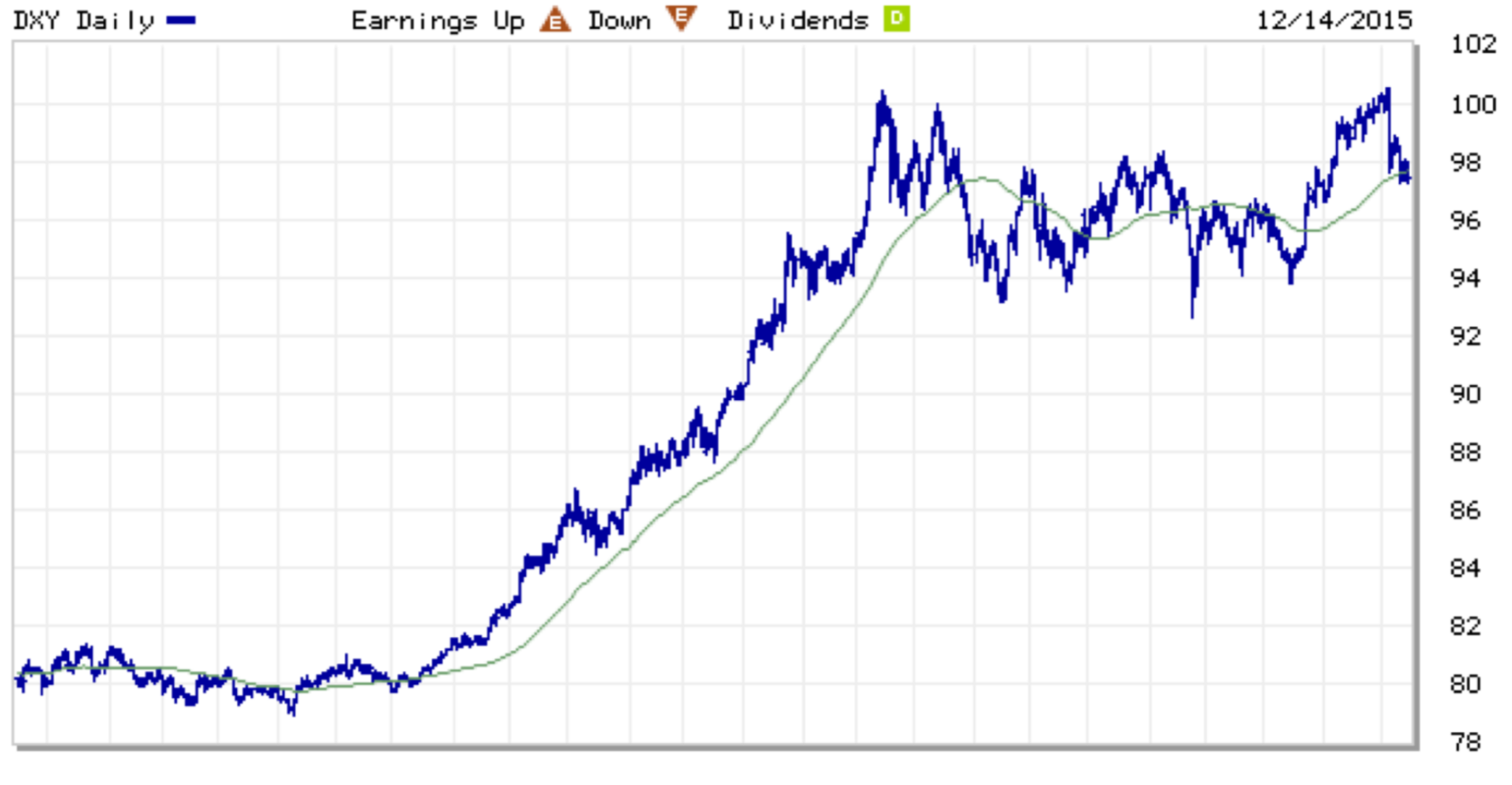 Strength of the USD since December 2013. (Source: Marketwatch)

As we noted in our newsletter dated February 2015, mutual funds distribute their capital gains to shareholders during the month of December. Historically, this has been a minor-to-moderate inconvenience. This year, it is potentially a much larger issue for taxable accounts. Sterling Capital Special Opportunities has distributed a 15% capital gain, and the Yacktman fund delivered a capital gain of almost 12%. Unfortunately, these examples are more “the rule” rather than “the exception,” which has put us in a difficult position of debating whether to sell or hold. If we sell, we may avoid the capital gain distribution but could incur a capital gain from our ownership of the fund. As a result, we are looking at each fund and each account on a case-by-case basis to determine the best course of action.

Furthermore, both of our currency-hedged ETFs, Deutsche X-Trackers EAFE (DBEF) and Wisdomtree Europe (HEDJ) are distributing capital gains generated from the futures contracts they use to hedge the currency exposure of the fund. Fortunately, DBEF’s gain is very small (less than 0.5% of net asset value), but HEDJ’s distribution is much larger, at approximately 6% of net asset value. At the time of this writing, with rare exception, we plan to continue to hold these positions and incur the capital gain because we remain confident that the USD will strengthen over the course of the next 12-18 months.

Finally, high-yield fixed income and the emerging markets sectors are in a state of turmoil. Although we do own positions in both, the overall exposure is comparatively minimal. Looking down the road, we think the emerging markets will remain risky and/or speculative while the high-yield market will offer select opportunities for investment.

In sum, our medium-to-long-term convictions have not changed. The US dollar will continue to strengthen, Europe and the US remain our favorite places to invest, and we must continue to be selective in our bond positioning. This year’s extreme volatility has been frustrating, to say the least, but we believe that iron-willed investors will be rewarded for their patience.

Warm wishes for a happy and healthy holiday season,